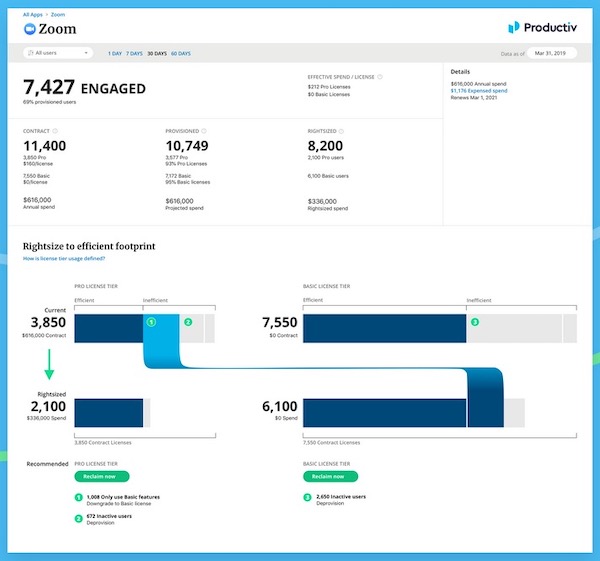 Due to the rapid growth of SaaS systems, companies are now using an average of 16 apps on average and 73% reported that nearly all their apps will be SaaS by 2020. However, there has been a decline in app usage transparency. Palo Alto-based software-as-a-service (SaaS) company engagement company Productiv announced it has raised $8 million in funding to help solve this problem, according to VentureBeat.

Founded by CEO Jody Shapiro, COO Munish Gandhi, and CTO Ashish Aggarwal, Productiv also emerged out of stealth mode this week. This round of funding was led by Accel partner and former CEO of RelateIQ Steve Loughlin.

Shapiro is a mentor at UpWest Labs and was previously the head of product management for Google Analytics. Gandhi was previously director at LinkedIn and Equinix. And Aggarwal previously held executive roles at Postmates, Amazon, eBay, and Microsoft.

“CIOs at Fortune 1000 companies tell us that they want to drive new business value from their software investments. Many of those companies spend tens or hundreds of millions annually on SaaS alone,” said Shapiro in an interview with VentureBeat. “Those CIOs tell us that application engagement insights give an unprecedented view into SaaS application usage, and it’s helping them understand how those employees collaborate and drive their teams’ productivity.”

Productiv’s core product is a cloud-based dashboard that integrates with single sign-on tools for tracking login activity. And it is able to extract purchase and license data from contracts and financial reporting systems. This provides an organization-wide view of agreements and expired software. Plus it also shows real-time usage and engagement stats to highlight redundant apps. Admins can create configurable rules and set up automatic license reclaims. The dashboard also includes charts that plot the number of engaged users, teams, and locations.

By offering this service, Productiv believes it can enable companies to make profit-boosting decisions using app analytics. Many businesses pay for services that are not being used, which can have a major impact on their bottom line and productivity.